MY thoughts about the new Joomla structure proposal

You are here probably because you have read about the new joomla structure proposal. It's still not supposed to be available to the community but in fact it is. People starts having questions, starts asking themselves what is this about. This is MY opinion about it.

We actually have 3 leadership teams: Production, Community and OSM. They have around 10 members each one. Also we have 3 officers because the legal requirements: President, Treasurer and Secretary. So all the big decisions (like this for example) are taken by more than 30 people. Is that bad? Not for me. In ensures plurality on the decisions taken. Yes it can be hard to take some decisions but that's mainly because a bad organization, not because a bad structure.

Look at the graphic: 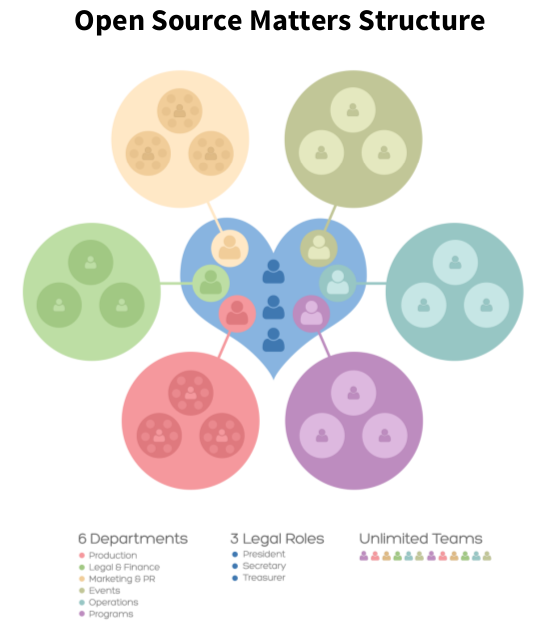 It's easy to identify the nine people on top of everything. So we pass from +30 heads to 9 people. For me that's scary and it's one of the things that has been a requirement of this proposal from the beginning. Not open to discussion. I cannot count the times I have identified this as a problem if corruption gets into Joomla.

Of course all of us are cool, nobody wants the power and the money..... But what happens if we want?

As member of the Production Leadership Team now I can say that only legal issues are really over us. We are free to do what we think is correct and spend our time in the right things. With the new structure and as member of the production "department" (what a shit word) I'll have ZERO decision power. All the real decisions will be taken by the 9 people or even worse by ONE department coordinator.

Also now all the working groups are reviewed, discussed and approved by all the PLT members. The new structure puts the group creation and approval again on those 9 people or 1 department coordinator. So in fact the future of Joomla would be decided by 8 non-technical people + 1 production coordinator. If you can't see a problem in that.....

We are volunteers. All of us have our jobs and sometimes life rules. In our current system if I cannot do a task for some time a team mate will jump into it and unblock things. Imagine new proposal's coordinator role. They will need to manage 5-10 teams. Teams with no real power so everything needs to go through that person. What happens if that person dissapears for some time? How much amount of work and decision power are we putting in that coordinator? This is not realistic in a volunteer driven system.

Again nothing about it. Again it will make things harder. Once again I can contact a CLT team member to get the right information. With the proposal I would need to start asking here and there to figure out who is the right person.

So we have here identified the two main problems of the leadership teams. And nothing concrete about them. Real solutions would be: let's use basecamp, let's write somewhere who manages what, let's put on the volunteer portal what we do, let's write procedures for most common situations.... But no, the focus is on changing the structure and who has the power. Politicians way.

A lot of people inside leadership teams has talked about Silos and how bad they are for Joomla. One of that cool words used to promote this proposal. But in fact this is fragmenting people into more departments. Creating more silos. More silos with zero communication improvements....

Other of the cool words used to explain how much we need this. Ironically the first proposal was intended to be approved without even share it with the community. Behind this proposal there have been a lot of obscure movements. And I'm sorry but I have zero confidence on this now. Seeing democracy used to sell it just makes me angry.

Also remember that coordinator decides which teams are approved. And that is the people that will be able to vote him. Is that really democracy? It's not. The more you climb in the hierarchical structure the less democratic becomes.

I hope that at this point you are able to see behind this the intention to handle Joomla more like a company. Department, recruitment, accountability.... Do you really think that will work? It goes against our main identity. Joomla was born to run away from the Mambo company model.

We do what we do because we love Joomla, not because there is someone above us asking us daily if we had done what we HAD to. Joomla is not just software and contributors are not workers. Ignore that and say goodbye to your audience.

The intention is to get this voted at JWC. Yes, in two weeks and it hasn't been even shared "officially" with the community. That's mostly why I'm here writing. To give you the "why not" information I think you need to create your own opinion.

I have discussed this with some of the founders of Joomla! They created the current structure to protect the project against ourselves. I invite you to ask their opinion on this. They faced same problems and questions than us years ago.

Sorry for the TL;DR

blog comments powered by DISQUS back to top